After granulation, the conveyor fan is used to convey the granules to the cyclone separator for cooling, and then the granules are further screened and cooled through the vibrating screen before being conveyed to the finished silo for storage. The output of EVA shielding material and PE/EVA carbon black masterbatch produced by the HKY model ranges from 300 kg/h to 1000 kg/h.

Similar to the other types of twin-screw extruder in the HKY/SKY series, this SKY equipment series with higher output can also be customized according to the actual production requirements, such as SKY 63-180: SK 63 twin-screw extruder with imported high-torque transmission box from Germany, the highest speed of screw 400 rpm, motor power 110-132 kW, and SE 180 single-screw extruder with screw diameter 180 mm, maximum speed of screw 60-90 rpm and motor power 45-55 kW. SKY machine produces EVA shielding material and PE/EVA carbon black masterbatch in the range of 400-1500kg/h. 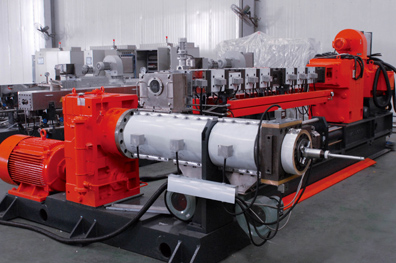