How Much Do You Know about the Common Parameter of the Double Screw Extruder Machine?

1. "D" : The screw diameter is the core parameter of the double screw extruder machine, and usually it is also used to define the model of machine. The screw diameter, or "D" of China's mainstream models mainly include: 20mm, 35mm, 50mm, 65mm, 75mm, 95mm. The screw diameter of third generation of models developed by Nanjing KY Chemical Machinery Co., Ltd. : 26mm, 36mm, 53mm, 63mm, 73mm, 96mm, 125mm, 135mm. The ratio of diameter to size of this series of models is consistent, and the amplification effect of model can be achieved under the same production conditions. 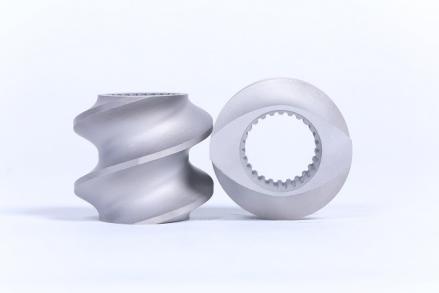 3. "H" : The depth of screw groove, which can reflect the size of filling space for materials in screw. Catering for special users' needs, Nanjing KY Chemical Machinery Co., Ltd. has developed HKV series deep groove models, so as to meet the users' broader needs in material technology, which has won a good reputation in the market.

4. "N" : The rotate speed of the main engine, which generally refers to the maximum value, and often reflects the performance of double screw extrusion equipment. In recent years, high rotate speed has been the international development trend of the double screw extruder machine. China's conventional manufacturers mainly give priority to the double screw extruder machine of 600rpm speed. Nanjing KY Chemical Machinery Co., Ltd. took the lead in the research and development and in 2011 launched the first model which was equipped with the main engine with the "N" of up to 900rpm, and the third generation of HK series double screw extruder machine, which has now become one of domestic mainstream models. After nearly 10 years of efforts, Nanjing KY Chemical Machinery Co., Ltd. has achieved major progress in the R & D, design and manufacturing, and the model equipped with the main engine with a speed of 1200 to 1500rpm has been launched. Besides, we have always met demands of users thanks to our stable and continuous production.